The First Black Woman Dentist in the US

The First Black Woman Dentist in the US 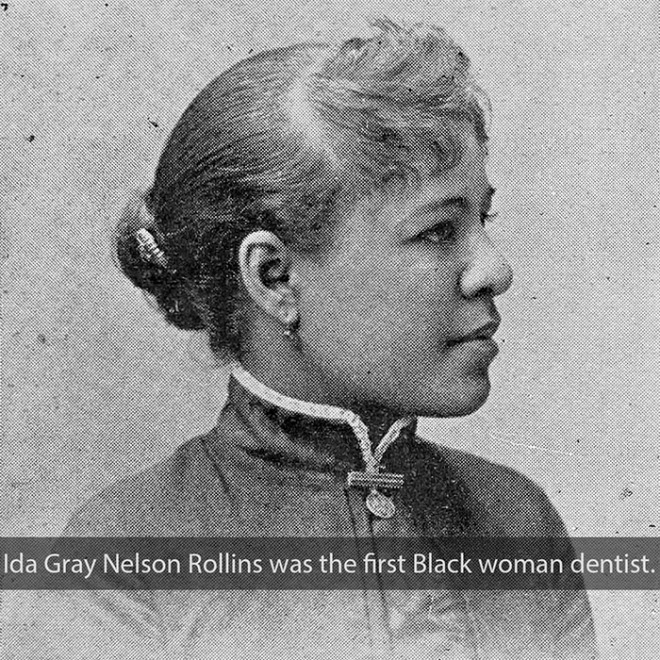 IDA GRAY WAS BORN in Clarksville, Tennessee in 1867. She became an orphan when her mother died in her early teens, after which she went to live with her aunt in Cincinnati. While Gray attended segregated public schools alongside her aunt’s three children and worked as a seamstress, she found time to work in the dental offices of Jonathan Taft, an early advocate of training women as dentists.

After three years working in Taft’s office, Gray had learned enough to pass the entrance examinations into the University of Michigan’s School of Dentistry, where Jonathan Taft had previously served as the dean, and begin her studies in 1887. She graduated three years later, making her the first Black woman to become a dentist in the United States. She opened her own office in Cincinnati, where she serviced patients of all races and was celebrated as a role model for women.

After marrying James Sanford Nelson, Gray moved her practice to Chicago, where she earned a reputation for her gentleness with pediatric patients and inspired another patient, Olive M. Henderson, to become the second Black woman dentist in Chicago. She was heavily involved in her community and continued practicing until her retirement in 1928. After the death of her first husband, she remarried William A. Rollins. She died in 1953 at 86 years old.

The content on this blog is not intended to be a substitute for professional medical advice, diagnosis, or treatment. Always seek the advice of qualified health providers with questions you may have regarding medical conditions.

In my 57 years of life, Dr. Simon is the best dentist I’ve ever seen. We are a military family and have moved several (more than I care to count) times. With each move comes the same challenges relating to finding new doctors, dentists, etc. A good dentist is particularly hard to find, as they are f… END_OF_DOCUMENT_TOKEN_TO_BE_REPLACED

Service is great, staff is knowledgeable and courteous. Highly recommended.

I recently went to visit Dr.Simon and was informed that I needed quite a bit of dental work, this came as a shock to me and I was of course very nervous. Dr.Simon and his staff were very kind and accommodating through the entire process. The work that he did was excellent, he takes pride in what he … END_OF_DOCUMENT_TOKEN_TO_BE_REPLACED

Dr. Simon is very sincere and thorough. He takes the time necessary to explain the procedures, expected outcomes and future care. His compassionate approach with a healing hand to all orthotic procedures make him a well-trusted dental professional and an exemplary human-being.

I’ve been a patient of Dr. Simon for many years and he’s the best!  I’m faithful about having a check-up every six months because Dr. Simon is always on time and very considerate.  I like the Brandermill location and his staff is professional, friendly and courteous.